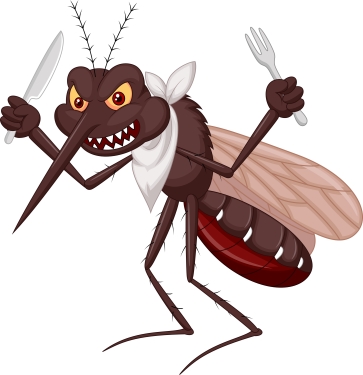 Mosquitoes.  Rightly feared, yet generally misunderstood, these jerks have been wreaking havoc on human beings since the dawn of man.  Yet, a simple understanding of their intentions and desires, can make co-existing with them, a far more manageable experience.

There are over 3,500 known species of mosquitoes around the world.  In scientific terms, that’s a lot!  Unfortunately, there are many unknown species as well.  As our civilization continues to deforest their natural habitats and as both global temperatures and water levels continue to increase around the world, we will eventually be feasted upon by an even wider array of species over time.  How exciting?!

Mosquitoes have been around since the Jurassic period and have been mentioned by many reputable people throughout history, such as in the philosophical musings of Aristotle and in the thought-provoking lyrics of pop sensation, Shakira.

Mosquitoes are often responsible for some of the most severe diseases (Malaria, Zika, and Dengue Fever) impacting human beings.  Also, no other insect can ruin a backyard party quite like they can.

Only female mosquitoes take blood meals from human beings.  They do this simply to lay their eggs, not to bother human beings, which is obviously just an unintended consequence.

Depending on your perspective, male mosquitoes are either totally useless or sort of respected for their narrow mindedness.  A female mosquito can beat her wings up to 500 times per second and the male selects the female with the highest frequency of beats to mate with.  Mating is basically all the male mosquito intends to do with his life.

…mosquitoes don’t actually bite.  They don’t have teeth.  No, their method of extracting a blood meal from an unsuspecting human is far more creative.  Female mosquitoes numb the area and inject a serrated proboscis into human flesh, thereby drawing blood through a tube, leaving their victims angry and itchy as they fly off to make babies.

Mosquito species have impressive scientific names like Aedes aegypti and Culex pipens.  When referring to the various species by their scientific names, please use the correct naming structure, including the use of italics and the capitalization of the first word.  Knowing this will allow you to impress uninformed backyard party-goers at your next gathering.

In the United States, West Virginia has the fewest species of mosquitoes; Texas and Florida the most.  This information will never be useful to you.

Removing standing water in your yard, or paving over all remaining greenery, can decrease their populations.

Mosquitoes prefer teleworking and don’t fly more than a few miles, at most, for blood meals.

Don’t sweat the small stuff!  Mosquitoes are attracted to octenol (a chemical found in human sweat).  In the hot summer, avoiding rigorous outdoor activities such as moving and breathing, will greatly decrease your chances of being victimized.

The best way to avoid being attacked by mosquitoes is to stay inside until the first freeze or wear an insect repellent containing DEET.  You’ll smell terrible but at least you won’t get Dengue Fever.

6 thoughts on “Mosquitoes: A Field Guide to Understanding Mosquitoes on World Mosquito Day”