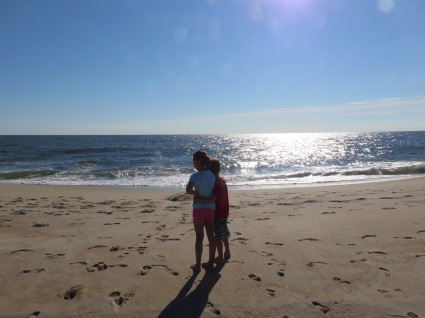 Almost immediately after the moment my daughter entered this world, I had a dreaded “dad thought,” my very first such thought.  Her 21st birthday would also fall on Cinco de Mayo, 05/05/26.  I began fearing the idea that she would be celebrating her first legal drinks at a bar with guys who would probably look at her in that way that guys do – that stupid googly-eyed way.  Being a guy myself, it was a look I also possessed at 21 years of age.  I quickly pushed that fear to the back of my mind.  I have 21 years to worry about that, I thought.  Well, now I only have 7.

That’s the thing about time.  When you are looking ahead at the yet unpassed moments, they seem so far off in the distance.  It’s almost as if you won’t ever reach them.  But when you turn around to look at the moments already crossed, it’s hard to believe you’ve accumulated so many.

My daughter’s about to head off to high school, my son to middle school.  These days, two thoughts come across my mind with frequency.  The first is that I can’t believe I’m about to have a daughter in high school.  The second is that I can’t believe I won’t ever have an elementary school aged child again.  Both are mind-boggling in their own right.  Put the two together, though, and it’s hard to comprehend.

These days, I don’t judge the passing of time by any landmarks I cross in my own life, but rather in the landmarks crossed in my children’s lives.

Everyone was right when they hurled the cliché, “It goes by so fast,” all those years ago.  As inexperienced and exhausted new parents, we dismissed that cliché back then, as we were just trying to navigate sleepless nights and mysterious (and gross) discharges from diapers.  Through projectile vomiting that led to unnecessary emergency room visits to a cornucopia of assorted temper tantrums, we managed.  When one of them began questioning the veracity of the tooth fairy, we got creative.  “If you believe in something, it’s real,” we said.  Skinned knees.  Drama with friends.  An unwillingness to get into the damned car seat for a drive (but an insistence on sleeping in that same car seat every night for nearly 5 months).  We’ve seen it all, and our lives are richer for it.

We are raising wonderful kids, but there is a bitter sweetness to that.  In just a few short years, I’ll be witnessing the culmination of a couple of childhoods I had a hand in creating.  They’ll be off on their own adventures, and we’ll be off on our own, seeing if the empty nest suits us as it did before Cinco de Mayo 2005, or if we need to replace the silence with a dog.

Don’t get me wrong: the challenges aren’t over.  Far from it.  But between the annoyed looks to the sky from my daughter and the super-sarcastic and rather frequent “Obviously!” from my son, there are genuine good discussions to be had.  It’s an honor to watch them make observations to challenges they are facing and to see them react with a maturity and thoughtfulness I wonder if I had possessed at their ages.

To anyone currently experiencing the sleepless nights and the mysterious (and gross) diaper discharges, I will say this:  Enjoy it.  It all goes by so fast.

4 thoughts on “It Really does go by so Fast”