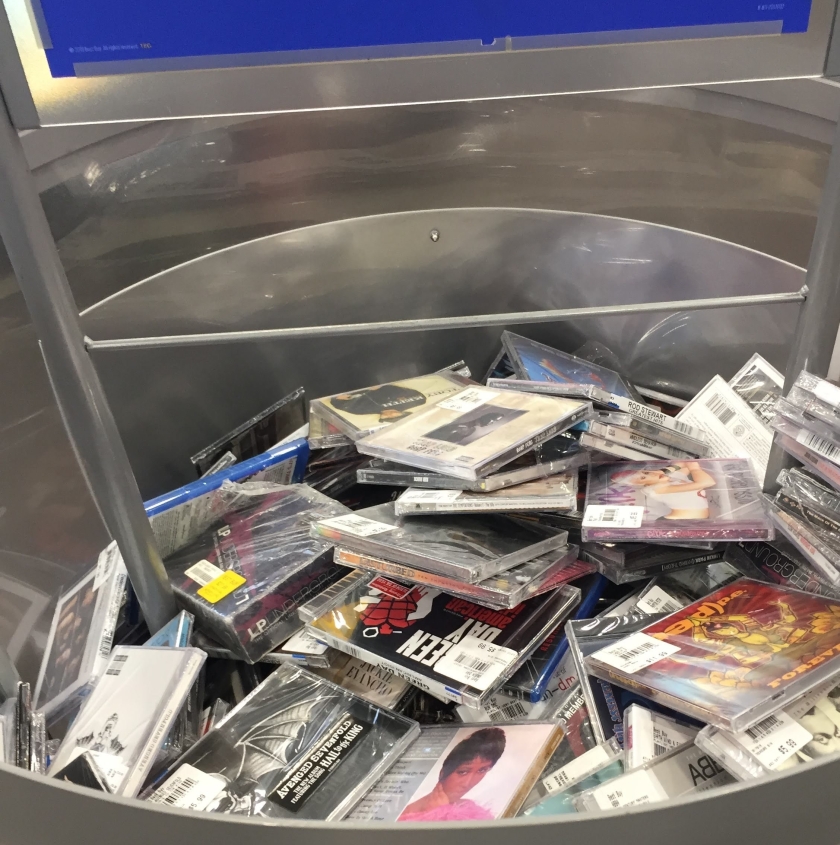 Apparently, in the words of Peter, Paul, and Mary: “long time passing.”

Generation-X, I’m afraid our beloved CDs—the music medium of a once mighty generation—have finally been relegated to the dust bin of time.  Over in the remotest corner of Best Buy, near the lone laser disc player and flip phone, lies the white bin of sadness.  In it lie a hundred or so compact discs, non-alphabetized and disheveled, chaotic reminders of a simpler time.  We may as well be in there too.

“There used to be row upon row of CDs right where we’re standing,” I said to the young, blue-clad store employee.  “It was glorious!”

1995.  Those were the days.  Back then, my friends and I would hop into whichever car had enough gas in its tank and drive to the nearest Best Buy, or Circuit City, or Tower Records, or even Blockbuster Music.  The latter’s business model was pretty untenable, which is why they’re out of business.  They’d let you actually listen to their overpriced selections first, before making purchases.  Once we had adequately sampled our desired selections, we would drive to a different store to purchase them for much cheaper.  Back in the 90’s, we had more time to hatch bright ideas.

If memory serves, Tower Records also let you sample before purchasing, but you didn’t care if they were overpriced.  It was Tower Records, and you just felt cool being there.

Upon entering the stores, there they would be: rows of music, separated into genres and alphabetized.  It was wonderful.  We’d spend hours there, in those pre-Apple music meccas.  Eventually, we’d get back in the car, pop in the new selections and jam out like there weren’t any tomorrows.  And if there were to be a tomorrow, we generally worried about it the next day.

Millennials won’t ever be able to make sense of buying an entire 12-song set list for what turns out to be one good song.  That happened with relative frequency.  And no disrespect to bands like Dog’s Eye View and Puddle of Mud, but they really only did have two good songs between them.  It mattered not though, not back then.  It’s what kids did.  And when you did discover a hidden gem of a track, you felt like you’d stolen something.

No one judged your musical selections either.  Well, mostly.  In every group, there was that one friend who opted for Vanilla Ice’s second CD over Nirvana’s third.  That guy always received a little hassling.

My musical tastes would seem somewhat bipolar by today’s standards, but back then they were eccentric.  I’d walk out of the store with a combination of stuff from Alice in Chains, Bob Dylan, Tom Petty, and Dr. Dre on more than one occasion.

And music planning for road trips was a magical endeavor.  Burning CDs for a 14 hour car ride?  Bring.  It.  On.

Nowadays, people can listen to their musical selections by asking Alexa or by thumbing through a watered-down playlist of greatest hits on their phone.  It all lacks a certain creativity.  It has become a lost art.

I suppose we’re now categorized along with record and cassette aficionados, but we’re in good company.  And before you get all high and mighty, Millennials, just remember that some yet to be invented technology will render you prehistoric one day.  It’s going to happen.  And when it does, well, you’ll be in good company.

2 thoughts on “Where Have All the CDs Gone?”