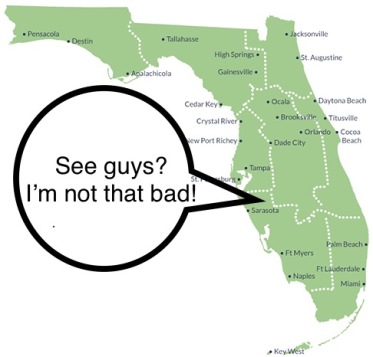 You people really need to stop blaming me for everything.  If you spent every day surrounded by water on three sides and a combination of Alabama and Georgia on top of you, you’d be pretty messed up too.  Clearly, I’m a victim of my own geographical circumstances.

Now, I’m not going to use this as a forum to blame all my problems on saltwater and a combination of Alabama and Georgia.  Saltwater and those states have their own redeeming qualities, or so I’ve been told.  In all honesty, I don’t get out much.

Like every state, I make mistakes. Without fail, whenever something happens within my borders, national pundits immediately stand up and shout, “Florida has its head in the sand!”  “What’s wrong with Florida?” they ask.  I even heard some self-important jerk say that “if states were medical conditions, Florida would be gout.”  What does that even mean?  Geographically speaking, only Louisiana could have gout.

As the third largest state in the Union, it is no longer acceptable for you to hold me responsible for everything that ails us as a nation.   I am a simple piece of land that shouldn’t be blamed for the incompetence of some of the individuals who reside here.  Is that clear?  There is no reason to insult me, a state, when you should be insulting the people who reside in me.  I am not the problem.  Floridians are.  There are plenty of good people here but there are also morons that deserve a significant portion of the blame.   The continuation of this behavior will force me to take my considerable talents elsewhere.

I’m a sight to behold.  I’ve got the Everglades, Lake Okeechobee, Point Washington State Forest.  The University of South Florida is amazing. When you sit on my idyllic sandy beaches and are afraid to go into the water because red tide might kill you, well, that sucks.  But at least I have idyllic sandy beaches.  Red tide notwithstanding, I am aesthetically pleasing; a natural beauty.  My days are warm and my nights temperate.  I’m a mild-mannered state if ever there was one.

I’m Florida.  People from all walks of life come here.  Spring break partygoers get drunk and do inappropriate stuff in my seedy hotels.  The persecuted who seek to escape dictatorial regimes arrive daily onto my shores.  Shaquille O’Neal once called me home.  LeBron James too.  I’ve got retired Jewish people from New York; refugees from Puerto Rico, Haiti and Cuba.  I even have Faye Dunaway.  You think Nebraska has Faye Dunaway?

For decades, I’ve been blamed for everything.  Violent shootings, election shenanigans, crocodile attacks, shark attacks, category five hurricanes, racially motivated crimes.  Hello, I didn’t invent stand your ground laws!  I even get blamed for gigantic sinkholes devouring entire square blocks.  Okay, that one actually might be my fault, but still.

Contrary to popular belief, stupid stuff happens in other places too, like Virginia.

I’m tired of being a national punchline.  Yes, there are idiots here that can’t even get an election right.  They can’t even get several elections right.  I get the frustration, but don’t blame me for it.  Blame the Floridians.  They’re the ones who can’t count.

Before the rising sea levels completely wash over me, I just want solace in the fact that we are in this together.  A beleaguered peninsula who bears the brunt of an angry nation?  Does that not seem wrong to you, America?  It needs to change.  You need to change.

4 thoughts on “An Open Letter from Florida”