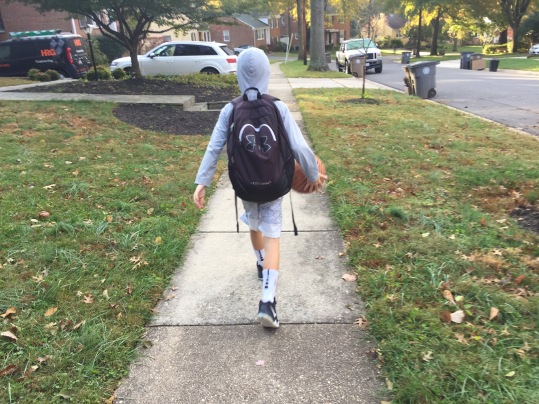 It’s that time of year again in the cooler parts of the country. The sun doesn’t seem as excited to rise as it did over the summer. The leaves, some of which are still holding onto their branches, seem a little worse for the wear. The morning grass is shrouded in a frosty coat. And ten-year old boys across the land insist on wearing shorts to school.

Parents, there’s no sense fighting it. Our children’s outrageously brazen attempt at displaying individuality is a strength, not a weakness, even if it’s painful watching them shiver as they await the yellow bus of warmth.

Fear not, parents. You’ve raised them the right way. In all facets of life besides their leg attire, they are fully functioning members of society. They brush their teeth. They do their homework. They are, for all intents and purposes, good kids.

Cold is pervasive. Sure, they may tell you they aren’t freezing, even as they attempt to conceal the symptoms of frozen legs. The immense shivering, knees clapping together, a pained look in their eyes like they want to admit they need pants but know that it will fly in the face of everything they fought so hard to achieve.

All we can do as appropriately attired parents is to hug our shivering children and mention to them that it really isn’t that cold outside with pants on. Lead by example.

Contrary to popular belief, wearing shorts in cold weather is an acceptable form of revolt for our children. They aren’t coming home with tattoos or e-cigarettes. They aren’t throwing rocks at passing cars. By the way dad, I’m still sorry for having done that back in 1985. In all fairness, it was Wesley’s fault; not mine.

There is no sense fighting it, parents. We must let our kids navigate the rigors of long pant-less winters on their own. Parents have been facing this dilemma for centuries. History tells us of the young sons of Thomas Jefferson and George Washington wearing shorts on their walks to the one room school houses of colonial America. The great orator, Abraham Lincoln, even lamented his young son Robert behaving this way, before finally accepting this rebellious behavior when he said, “It has been my experience that folks who have no vices have very few virtues.”

We will certainly draw the ire of adults who have yet to raise children for allowing the younger generations to display such a healthy disrespect for American values. After all, no successful child can also be a shivering one. However, America was founded on the virtues of freedom of choice and we must not bow down to the careless opinions of others, nor should we mock them when their children display the same poor judgment in the coming decades.

We are in this together; the parents of son’s who insist on wearing shorts in cold weather. Let us not waste our energy infighting. We are raising independent children! Witnessing them relentlessly shiver is part of successful parenting.